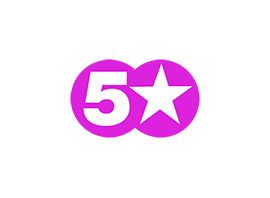 5* (pronounced "five star") is a television channel in the United Kingdom owned by Viacom International Media Networks Europe. It is a sister channel of Channel 5 and 5USA. The channel was launched as "Five Life" on 15 October 2006, and was rebranded as "Fiver" on 28 April 2008, and "5*" on 7 March 2011. The channel is available on digital television via Freesat, Freeview, Sky, and Virgin Media. 5* broadcasts between 09:00 and 00:00. It was originally launched by RTL Group (the former owner) as part of their multi-channel strategy, which all other analogue broadcasters, such as ITV plc and Channel 4, had already achieved.

The channel was intended to be a female-oriented channel with an emphasis on lifestyle programming. Channel 5 announced that programming on launch would include The Ellen DeGeneres Show, Love My Way, Windfall, Angela´s Eyes, and a weekday double-bill of the chat show Trisha Goddard. New episodes of Australian soap opera Home and Away are shown daily, as part of a ´First Look´ airing following the show´s main broadcast on Channel 5. A weekly omnibus also airs every Sunday. Repeats of popular female-skewing dramas, both nationally and internationally produced, were soon acquired. Following the channel´s launch, a time-shift version of the channel was launched in summer 2007.

Five Life relaunched as Fiver in 2008 with a new on and off-air identity. A raft of new programs were added to the schedule, alongside the refreshed look. The channel´s target audience was still females. These new programs included Celebrity Rehab, Dirt and re-runs of Sex and the City.

The channel was rebranded as 5* again in 2011, supported by a new logo and branding to underline the fun-loving image of the channel. On 11 April 2011, 5* reduced its broadcast hours to 13:00 to 00:00, replacing the hours withdrawn with more teleshopping. Milkshake! programmes (for children aged 7 and under) were no longer broadcast on this channel because of this reduction, but continue to broadcast on Channel 5. A range of new programming was also added to fit in with the channel´s refreshed identity and target audience. These included $#*! My Dad Says, Better with You and Parenthood.

When some of these new programs failed to make much of an impact in the channel´s ratings, several were dropped and replaced by new locally produced and acquired programming. These included the American series 8 Simple Rules, 10 Things I Hate About You, Alphas and The Lying Game.

Big Brother: Live from the House, a Big Brother spin-off that aired 60 minutes of live feed following every eviction show, began airing in 2012. This was following parent channel Channel 5´s acquisition of the reality series that formerly aired on Channel 4. The ratings were so high for the first-run, that for the 2013 season of Big Brother it was announced 5* would air 120 minutes per day of Big Brother: Live from the House. However, ratings were at a share below that of the channel´s average, with just 70,000 watching the first live feeds. Subsequently, the live feeds were shut down and the spin-off show last aired in June 2013.

In 2013, American Idol was purchased by Channel 5, with the following two seasons announced to be airing first-run in the United Kingdom and Ireland on 5*. Previous seasons had aired on ITV2.

Continuing the channel´s venture into reality based programming, Tallafornia was acquired from Ireland´s TV3 and this was soon joined by Bar Rescue, World´s Worst Tenants and Top 20 Funniest in 2014.

The current schedule includes a variety of programming, including the aforementioned reality series, as well as the first-run rights to Helix, the second-run rights to American series Falling Skies, Under the Dome and The Walking Dead, and Australian soap operas Home & Away and Neighbours. Popular documentary series shared with Channel 5 air throughout the daytime and primetime hours, such as The Gadget Show. As of 2014, the channel runs a primetime movie every weeknight at 21:00. On the weekends, the latest BAMMA fights are typically broadcast first-run to the United Kingdom and Ireland.

The time-shift version of the channel was shut down on 3 February 2014 and replaced by Channel 5+24. The channel returned later, launching on Sky on 4 November 2014.

Following Viacom´s purchase of 5*´s parent channel Channel 5 in 2014, one of their existing UK channels, VIVA, was to shut down on Freeview and most of its content is to move to 5*. Series such as Catfish: The TV Show and 16 & Pregnant are to commence moving to the channel from 2015, with the VIVA channel to be replaced by the launch of a new channel owned by Viacom named Spike and 5* changed their time from 13:00-00:00 to 09:00-00:00.

The launch of Five Life was at the time ranked as the best received multichannel launch for a terrestrial broadcaster, only managing to achieve a primetime share of 0.21%. Following the channel´s relaunch as Fiver in 2008, the all-day share for the channel has been between 0.5?0.6%.

The highest rated series airing on the channel are Home & Away, Neighbours and the weeknight showings of primetime movies. The highest rating for the channel is held by Big Brother: Live from the House, when it received just over one million viewers and an audience share of over five percent in 2013.