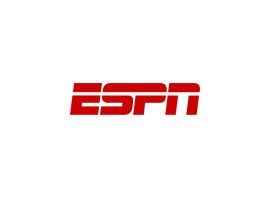 ESPN (originally an acronym for Entertainment and Sports Programming Network) is a U.S.-based global cable and satellite television channel owned by ESPN Inc., a joint venture between The Walt Disney Company (which operates the network) and the Hearst Corporation (which owns a 20% minority share).

ESPN broadcasts primarily from studio facilities located in Bristol, Connecticut. The network also operates offices in Miami, New York City, Seattle, Charlotte, and Los Angeles. John Skipper currently serves as president of ESPN, a position he has held since January 1, 2012. While ESPN is one of the most successful sports networks, there has been much criticism of ESPN, which includes accusations of biased coverage, conflict of interest, and controversies with individual broadcasters and analysts.

As of February 2015, ESPN is available to approximately 94,396,000 paid television households (81.1% of households with at least one television set) in the United States. In addition to the flagship channel and its seven related channels in the United States, ESPN broadcasts in more than 200 countries, operating regional channels in Australia, Brazil, Latin America and the United Kingdom, and owning a 20% interest in The Sports Network (TSN) as well as its five sister networks and NHL Network in Canada.

In 2011, ESPN´s history and rise was chronicled by These Guys Have All the Fun, a nonfiction book written by James Andrew Miller and Tom Shales and published by Little, Brown, & Co.